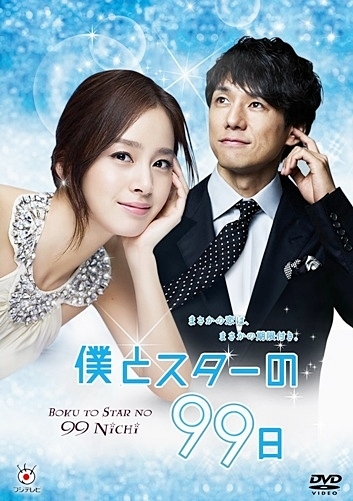 Summary : In the romantic-comedy “Boku to Star no 99 Nichi” top Korean actress Han Yoo Na falls in love with a quiet man named Kohei Namiki.
Kohei Namiki is a single man approaching his 40’s. He works at a security company as a part-time job. He also has a sweet and handsome appearance, which some people take advantage of. Kohei is easily swayed by those around him. Kohei often takes care of his sister’s three kids because Kohei’s sister has a habit of wandering around, but he is a passionate man and dreams of finding his star. Because of his family and economic situations, Kohei can’t follow through on those dreams.
One day, Kohei is assigned security detail for the beautiful actress Han Yoo Na. Even though she has a near perfect appearance and style, she prefers to act like other normal people. She enjoys eating simple Japanese foods and on the filming set Yoo Na will stop to help others. Yoo Na has a pure and kind spirit. She seems to be the envy of all, but inside Yoo Na is lonely working in the entertainment field and she also has a big secret.
At first, bodyguard Kohei and top star Yoo Na don’t get along. With time they become closer. Over the next 99 days their relationship changes. On the 100th day when the contract ends what choice will they make?