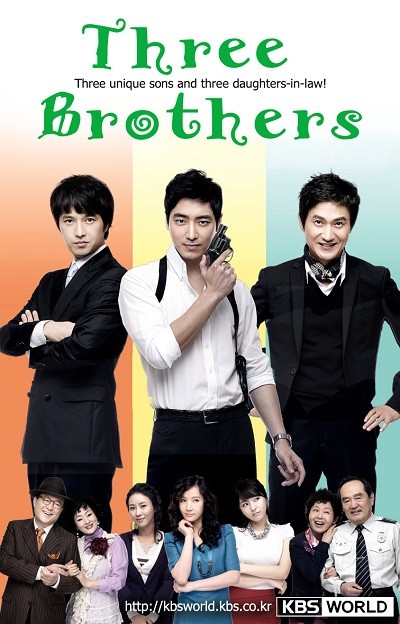 Summary : Kim Sun Kyung is a retired police officer and father of three sons, Gun Kang, Hyun Chal and Yi Sang. His eldest son Gun Kang made many wrong decisions in life, ending up being divorced and going bankrupt. Gun Kang gets remarried to Chung Nan. His second son Hyun Chal is the envy of the town and pride of his father. He runs a number of businesses which are quite successful. His wife Woo Mi often sacrificed her happiness for the benefit of the Kim family. As for the last son Yi Sang, he follows in his father’s footsteps by becoming a police officer. Oftentimes the father and the son clash each other. As Yi Sang married Eo Young, the daughter of his father’s deadly foe, an ex-convict Sun Kyung traced and eventually arrested a long time ago. “Three brothers” revolves around their relations full of conflicts and love.