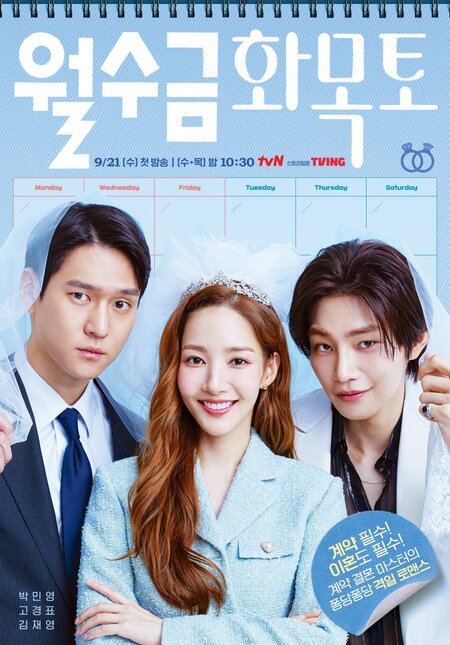 Summary : Tells the story of a helper service that provides wives to single people needing partners to take to gatherings for married couples and school reunions. The story portrays Choi Sang Eun as she gets entangled with Jung Ji Ho, who is on a long-term exclusive contract for Mondays, Wednesdays, and Fridays, and Kang Hae Jin, who signs a new contract for Tuesdays, Thursdays, and Saturdays. Choi Sang Eun, is a woman possessing many great qualities and virtues. As the perfect partner, she chooses a career of helping single men who don’t want to get married instead of getting married herself. Jung Ji Ho who has been in a long-term contract with Choi Sang Eun for Mondays, Wednesdays, and Fridays for his fifth year. In addition for the reason behind his contract being a secret, Jung Ji Ho is a mysterious character whose occupation, hobbies, and personality are also shrouded in a veil of secrecy. And Kang Hae Jin, a rich heir as the family’s youngest son and Hallyu star. Kang Hae Jin is Choi Sang Eun’s newest client for Tuesdays, Thursdays, and Saturdays, and he will cause a great storm in her heart.